Why does tough feedback or criticism unravel us? It’s because it’s striking a nerve within us around an insecurity we have that we may not be in touch with.

For whatever reason, a number of coaching clients and mentees I met with in one  week recently were all talking about a point where they became unraveled in their career after having a boss or manager that was tough on them. Each of them gave me a back story of being a strong performer who had a successful, positive career experience until they were managed by that person they felt was so hard on them. Since that manager, they have felt more insecure and lost in their careers, and also have been feeling like they are not cut out for the work they’re doing, and waiting for someone to call them out for it. 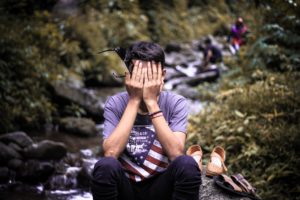 Several of them told me they feel stupid or like an idiot every day. Lost. Inadequate. Directionless. It is sort of a case of imposter syndrome, but actually a bit darker than that.

I cannot say why there was this concentration of similar issues from such different people (none of them works for the same company or even in the same industry, lives in the same geographic area or knows each other). They are all in their late 20s and early 30s. There is something to that, but that’s a theme for another post.
The similarity was really in the narrative. They had always done great, had a tough boss, took on another role (at the same or different company), and were struggling since then. And as they told me their stories, none of them connected their current self-assessment to anything that happened with that tough manager. They used that part of the story to point out why they decided to move on from that role (a bit of proof around the idea that people don’t leave companies, they leave bosses).

They were all confused since they saw themselves as successful and capable. They were left wondering if they had all made a mistake in taking on this new job that was clearly too hard for them. I was doubtful the job was really too hard for them, but rather that tough boss they had left them with a different view of themselves that was now affecting how they felt about the qualifications for their new role.
As we talked, I asked them all the same question, “Why did that tough boss affect you so much?”
Each one of them paused. For a long time. They had been describing the person similarly. The bosses were all known to be really tough if not jerks (or worse), and had really bad reputations in the company. No one seemed to take their view on others seriously since it was well known they were just super tough on everyone regardless of the level of that employee’s performance. And they weren’t good tough, like a coach who pushes you to be better. They were irrationally and inconsistently tough, which can leave you bewildered and demoralized.
They struggled to answer the question, so I helped them. I asked some version of the following leading question, “You have been describing yourself before that boss as a superstar or at least really strong performer. You seem really sure of how you were doing, almost pushing the idea so hard that you are trying to make that point or prove something. Why would a tough boss who is now in your past have such an impact on you? What did they say that struck a nerve so much? Did they hit on something you have been thinking about yourself?”

Did they hit on something you have been thinking about yourself?

Then another pause. This is the key.
The reason that tough manager started an unraveling is that they were hitting on an issue that the person already felt inside somewhere. They have an insecurity that someone else had called out, which made it more real. And because none of them was directly admitting the basis of this self-doubt or addressing it, it was able to have an out-sized impact on them.
They went on to new roles, which inherently include feelings of being lost, confused or inadequate as you learn new things. Add to that an underlying sense of inadequacy or incapability that had been festering which their tough boss called out (whether justifiably or coincidentally), and you have a recipe for the sense of stupidity, inability and being lost that they were coming to me to talk about.

What Can You Do About It?

The best way to deal with this is to bring it to the surface, fully exposing and understanding it. You cannot work through something you don’t actively admit. Seek to understand why you doubt yourself. As probing questions, and hold nothing back in your answers.

Where does it come from? What is it about?

Were you consistently put down by someone as a child around one aspect of your life? I certainly had this issue operating within me after years of being made fun of for my weight and consistent inability to keep up with other kids physically. I definitely had self-doubt around how I present with a need to over-compensate tied to how I was judged for how I look.   I tended to feel the need to list off accomplishments and experience to combat some presumed judgment by my audience that I must not be good enough. That has lead to being judged as arrogant and over-proud (little did they know it was rooted in self-doubt!). I have consistently found myself looking at the swim lane next to me, so to speak, to see where the others are, and then let our relative positions spiral into creating a narrative as to why I was ahead or behind them that either lead to fear that I cannot possibly keep it up, or overly-harsh views of the other person since they cannot even keep up with me and I’m the slowest/least capable one out here!
How about you? Did you have some major failure that you have ruminated on that you actively bring into the present day (this is what Do a Day is all about, so this could be a helpful book for those caught in this trap)? Did someone criticize you in a way you were already criticizing yourself, so it had a bigger impact on you than it might have otherwise? If so, maybe this approach can help.

Does It Feel Like Everyone is an Actor in the Show of Your Life?