It’s not failing that matters. It’s what you do when you fail that sets you up for success.

Mistakes. We all make them. As I’ve shared before, I certainly have. It’s not the mistakes, but rather how we recover from them that matters most.

While I’ve talked about that for individuals, a recent experienced reminded me of the universality of so much of what I talk about in Do a Day and in these articles and how it applies not just to people but to organizations and even families, too.

I’m an Apple fan. If I was younger, I might officially be a ‘fanboy’. However, I am well aware that not everything Apple does is perfect. While they make great products and have solid support, they aren’t infallible.

The computer I wrote Do a Day on and I depend on every day, had developed an issue where it needed to be repaired. I found a window of opportunity where I knew I could go without it for a week, took it to a Genius, and had them send it to their repair facility to fix.  It came back in three days. Wow.

Unfortunately, it also came back with a new problem caused during the service—the monitor hinge was now loose, letting the screen flop around. So I looked for another window of opportunity, went back to the Genius bar, and had it sent out to have the hinge tightened. It was such a simple repair, I had hoped they could just do it in the store, but they said they never work on this model locally due to the complexities with it. OK, fine. 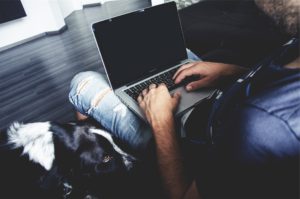 About four days later, my newly-fixed laptop showed up at my house. For some reason, they had decided to replace every component, including the hard drive and all the data on it even though it just needed the hinge tightened. Unfortunately, my last backup was about a month old as I didn’t get a chance to run a backup because of all the back and forth with the repairs. So I lost a bunch of emails, which is frustrating, but not the end of the world.

A couple of days later, before I could get another backup to complete, the computer just went black, and wouldn’t respond.

I spent about an hour on the phone with a support specialist and then her supervisor, both of whom were great. Unfortunately, there was nothing they could do and the machine needed to go back for a third time. Of course, two of the three repairs were now because of Apple’s actions (or mistakes) rather than anything I did or that had just happened to the machine over time.

Unfortunately, this was a Thursday night, and Tuesday morning, I had a 6 AM flight to Costa Rica for an event, and I absolutely needed my laptop for that trip. Needless to say, I was frustrated that I was yet again in this situation, that it was again because of Apple rather than anything I did, and that my ability to meet my obligations was now seriously at risk.

I asked if there was any way they could send me a replacement unit since this was Apple’s fault, but there was nothing they could do. The supervisor asked me what Apple Store I go to, and said she’d speak to them in the morning to see if they could help.  I knew that was useless since they can’t work on the machine there. The only option was to ship it out for repair on Monday, and for me to be without it on my trip.

The supervisor called me back the next morning, and told me the store manager had said I should go there, ask for him by name, and he would, “see what he could do.” I asked what that meant as my time was so limited before my trip that I didn’t think I could afford a couple of hours of waiting at the store for them to tell me it has to be shipped out.

She wouldn’t answer me other than to just keep repeating that they’d see what they could do.

Well, I found slot to head to the store Saturday morning, spoke to the manager that the rep had dealt with, and he took it into their back room with a technician after confirming I wasn’t just pressing the power button wrong or something.

About 15 minutes later, he came out. He confirmed that it really was unsolvable, and then he did something that changed my level of frustration–he gave me a new computer. He said he knew the problem was big enough to require replacement, and given that this is the second failure on their part and it was going to materially impact me, he was just going to give me a new machine.

Now, all was not perfect as I lost a lot of emails because of the age of my last backup, and of course I had spent a lot of time dealing with this unnecessarily. But I was up and running again before my trip. He didn’t have to do that, but he did anyway. That single-handedly undid all of the displeasure I had with Apple through the process.

Similarly, I bought a cheap, nylon duffle bag on Amazon. After a month, the zipper failed. I didn’t reach out for support or an exchange since I was outside of the return period, but I did leave a product review, noting the durability issue and that the zipper failed. The seller saw my review and proactively reached out to offer me a replacement or refund. They went out of their way to see whether their customers were satisfied, and took steps to make sure they were if there was any problem.

And now I would consider this seller again whereas I was going to just never buy anything they sell in the future.  Being an Apple fan, I can’t say I was going to write them off from my experience up until the replacement, but I certainly didn’t feel as rosy about them.

Now, should Apple have fixed the computer initially without causing other issues (or doing it again)? Yes, of course. Should my bag have been made well enough to be opened and closed a few times before the zipper broke? Absolutely.

But things happen, and once they do, we can’t make them unhappen (there’s a reason that’s not even a word).

But we can make the impact of them ‘unhappen’ by stepping up, taking ownership and trying to make people whole or as close to it as possible.

The lesson applies universally across situations and the roles we play in each of those situations. Whether it’s about mistreating someone, having a product or service fail to meet expectations (or just fail completely), or anything else, the way we respond can be what defines us rather than the fact that we failed in some way.

How Doing Less Can Help You Achieve More in Your Career