I got my dream job at a dream company with a dream team, yet I just walked away. Here’s why.

In 2015, I landed what was the biggest and best job of my career. I had spent nearly two decades in insurance, climbing my way up the ladder through a series of great opportunities, but this was the kind of job I had always wished for. In fact, if you read the essays I wrote in my business school applications, I specifically described this kind of role–C-Suite job at an insurer.

Beyond the responsibility and level of the job, the company I was going to do it at was amazing. The opportunity in front of them, how they were seizing it, and the culture they had were simply non-existent anywhere in the industry. People would hear that I work in insurance and think it was so boring. The company I was at, Hiscox USA, could not have been any more exciting and forward thinking.

And yet, after three years as Head of Claims, I just left. If this was my dream job, why would I walk away after only three years?

The answer is simple, but not easy.

I found what I was passionate about and could no longer deny it.

See, a few months into my tenure, I started work on what would become my best-selling book, Do a Day. Fifteen months later, I released Do a Day, and began an extremely busy and unbelievably rewarding second career talking about the book and trying to help others change their lives through the message within it.

I was a guest on over 120 podcasts and radio shows, two TEDx Talks, launched my own podcast, wrote for Inc. Magazine, and had articles published by the Chicago Tribune, LA Times, Baltimore Sun and others, plus I was quoted in numerous other publications like CBC Life. I’ve gotten to coach people from all walks of life facing varied challenges they want help figuring out how to overcome. I also have been asked to speak at several conferences and group events to try to inspire audiences to improve their lives. 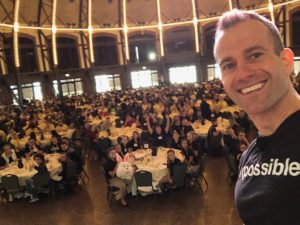 I was doing exactly what I had wished for. And while it was exciting, I kept feeling like I was constrained by an amazing but intensifying day job that was growing bigger and bigger by the month. Every time I had a few minutes to put into my passion work, it would pay off, but finding those minutes was getting tougher and tougher.

The place I found the time, unfortunately, was by cutting my sleep back further from an already meager place. It was not a sustainable equation. Adding to that heavy travel for work (I generally was away from home five days a week), and the physical toll was growing.

But every time I took the stage to inspire people, I would just be so energized.

So I started to plot a path to leaving my day job, but I was scared. I set a date, but also sort of didn’t really intend to make it happen by then because I was scared. It was far enough in the future that I didn’t really have to think about it, and would just keep plugging ahead, all the while burning out.

Six months ahead of that date, I had to leave.

The toll on my family was getting to be too great. Physically, I had a bit of a scare where my heart rate wouldn’t keep a normal pattern and it was hard to breath. It was similar to what you might see in a race when someone collapses. I’m very fit, so it wasn’t about being out of shape, and it wasn’t a panic attack. It was just extreme exhaustion.

So that Monday, my boss and I talked, and we set my last day, and that was that. It was such a strange mix of exciting, freeing and scary. It was also incredibly sad for me. I absolutely love my company, my team and my job. I never thought I would have a job like this in terms of all things about it being so great.

But the thing about leaving something great that you have to leave is that there will never be a good time. It’s like going on a diet–there’s never a perfect moment. There’s always someone’s birthday, some big dinner you’re going to, some travel that would seem to make a diet harder to stick to, etc. But you still have to just do it sometimes.  I learned that with the excuses I kept making about trying to go Vegan, and that’s why I challenged everyone to go Vegan for one day on my 40th birthday on October 19th, 2018.

“Making a scary decision is like starting a diet–it’s never the right time, but you have to do it anyway.”

I kept thinking, “If I just had another week or month, I could hand things off better. I could work with this person on their development and get them to a better place. I could solve this problem or that.”

Inevitably, there would just be something else that I could do if I just had a little more time. And that wasn’t going to be an option any longer.

I jumped out of the plane before checking for a parachute 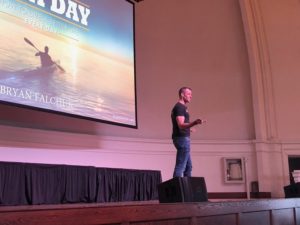 So I made the leap. I am writing this as I fly home from a public speaking event I did on behalf of the company – my last official act in my role (though I still have one more day of work, technically). I’m still as excited as I was earlier in the week, but also equally scared and sad.

The outpouring of support from people about me making this change to pursue my passion has been amazing. And the notes I’ve gotten from people at work have been so touching and reaffirming that I had a material, positive impact. That’s all I want to do in life. Some people came to talk to me one-on-one. Some tried, but just burst into tears (several times). I got one long, hand-written note that is literally the most beautiful thing I’ve ever read from anyone I lead.

So I’m leaving feeling buoyant about my impact on people, and letting that be the tone of my exit. And I’m running full steam toward the light of my true purpose.

Do I wish this had all come together when I was at a job I didn’t like? Of course. But I also realize that really could not have happened as I wasn’t in an environment where my passion could thrive. It took a more positive, forward-looking, supportive environment to grow and thrive. So it’s no coincidence that the job I had to leave was the one I least wanted to.

To all the amazing people of Hiscox globally, you have the greatest culture and skill of any insurer, and that allows you to keep thriving and outgrowing competitors (sometimes by a factor of 30x!). To the unbelievable people of Hiscox USA Claims, I am so lucky to have gotten to call you colleagues, friends and superstars.

And to everyone who has read my book, heard me on a podcast, worked with me as their coach or seen me on stage, you’ve gotten a taste of what’s to come.

I’m going to do this like I’ve done every major thing I’ve achieved in life. I’m going to Do a Day. I am not going to get hung up on what was, nor will I be enveloped in fear and anxiety about all that lies ahead, and whether things will work out. Each day, I will do what I have to do in pursuit of building a successful career as an author, life and executive coach and public speaker. And now I will have the time to Do it.

Coping with Anxiety in a Time of “What-Ifs”